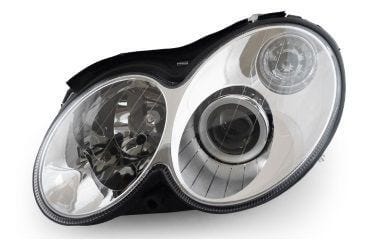 The nameplate "Town & Country" was presented by Chrysler 75 years ago. The first Town & Country model was a 4-door 8-passenger wagon manufactured in 1941 – 1942. In 1945, the Town & Country appeared on the market again, this time in three body styles: 4-door sedan, 2-door hardtop and 2-door convertible. In 1950s a new generation was released – unlike its predecessors, it featured steel body. In the end of the 1960s the design was refreshed with a pronounced side curvature from the rocker panels all the way to the roof rails. In the 1970s the fuel tank was moved under the floor just behind the rear axle for more safety. In 1982, the Town & Country started utilizing the K-body platform. However, in 1988 Chrysler decided to stop the use of the K-body platform and therefore, the Town & Country model was discontinued.

Only one year later, Town & Country has returned, this time as a series of luxury minivans. The first generation started in 1989 as a 1990 model. It was based on Chrysler S platform and featured 119.1 in wheelbase. This generation came with 4-speed A604 automatic transmission and 3.0 L Mitsubishi G72 V6 or 3.3 L EGA V6 engine. The second generation (1991–1995) was built on Chrysler AS platform and was provided with a slightly increased wheelbase. Two engine options were available: 3.3 L EGA V6 and 3.8 L EGH V6 engine.

The third generation was released in 1996. It was built on Chrysler NS platform and came with a refreshed design. Chrysler offered two versions of the Town & Country model: s short-wheelbase (113.3 in) and a long-wheelbase (119.3 in). Unlike the previous generations, the fourth generation (2001–2007) was available with 4-door body style only. It was based on Chrysler RS platform and featured 4-speed 40TE or 41TE automatic transmission. At first, only the long-wheelbase version was presented. However, in 2003 the short-wheelbase model became available as well.

The fifth generation was launched in 2008. It utilizes Chrysler RT platform and comes as a long-wheel model only (121.2 in). The new Town & Country is equipped with 4-speed or 6-speed automatic transmission and several engine options. A variety of useful features are provided as well, like power windows on the sliding doors, a rear overhead console with LED map lights, new DVD system, SIRIUS Backseat TV, and more.

In 2008, Chrysler presented a plug-in hybrid Town & Country with an all-electric range of 40-mile (64 km) before gasoline starts. But one year later this model was discontinued. In 2016, a new plug-in hybrid version will be released in the USA. However, Chrysler announced that in 2017 all Town & Country models will be discontinued and replaced by the Pacifica series.

It's time to unleash the beast in your vehicle with Chrysler Town & Country Accessories and Parts and where else to look but Automotive Stuff? At Automotive Stuff we know how important your car is to you and never compromise on quality. Our selection of performance parts and accessories are made by the highest quality manufacturers. Not only that, we offer the lowest prices. So don't wait any longer and take your car to a whole new dimension.