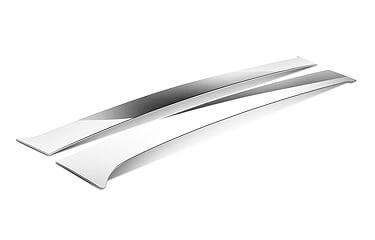 Chevrolet Corvette (also known as “Vette”) is a line of sports cars and was named after the small warship called a corvette. The history of Chevrolet Corvette has begun more than 60 years ago and includes seven generations.

The first generation (1953–1962) was originally designed as a show car and is often referred to as the "solid-axle" models. The second generation – C2 (1963–1967) was a coupé with a distinctive tapering rear deck and was available with hidden headlamps, non-functional hood vents, and an independent rear suspension. The third generation (1968–1982) was also called C3 and came with T-top removable roof panels as well as new body and interior, but most engines and chassis components remained the same as in C2 model.

In 1984, the fourth generation has started with entirely new design and modern chassis features, like aluminum brake calipers and an all-aluminum suspension. A new electronic dashboard with digital liquid crystal displays was provided as well. The fifth generation was introduced in 1997 – it had improved design and better structural rigidity. The sixth generation (2005–2013) featured new bodywork with exposed headlamps, a bigger passenger compartment, new 6.0 liter engine and modified suspension geometry.

The seventh, latest generation (C7) was launched in 2014. It is available with direct injection, variable valve timing, and an active fuel management system. C7 also comes with a carbon fiber hood and removable roof panel. In 2014, Chevrolet Corvette has won the North American Car of the Year award.

If you're looking for Chevrolet Corvette Accessories and Parts, there is no place better than Automotive Stuff. We make no compromises on quality and guarantee you only the very best for your car with the best prices!