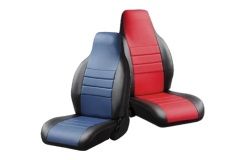 Forty years ago the German automaker BMW started producing a line of compact executive cars, called "3 Series". It was manufactured in six generations. BMW 328i appeared for first time in the third generation – the BMW E46 Series. BMW 328i came to replace the 325i model. The 328i was introduced in 1996 and was equipped with M52B28 engine. It featured 106 inches wheelbase and FR layout. Four body styles were available: sedan, coupe, convertible, and wagon.

BMW 328i is available in the newest, sixth generation as well – the BMW F30 Series. BMW released several models 328i – Touring, xDrive Sedan, Gran Turismo, and xDrive Touring. BMW 328i Touring and xDrive Sedan were introduced in 2012, while the Gran Turismo, and xDrive Touring were launched one year later. In comparison with the fifth generation, the new BMW 328i is larger, yet lighter. The 328i also features a new N20 turbocharged inline-four two liter engine.

It's time to unleash the beast in your vehicle with BMW 328i Accessories and Parts and where else to look but Automotive Stuff? At Automotive Stuff we know how important your car is to you and never compromise on quality. Our selection of performance parts and accessories are made by the highest quality manufacturers. Not only that, we offer the lowest prices. So don't wait any longer and take your car to a whole new dimension.